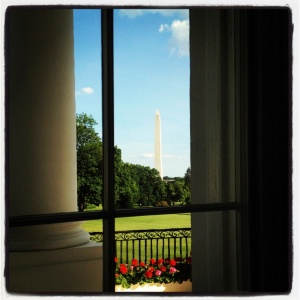 This week I will relinquish command of my company in preparation of my move to the East Coast for my next assignment as a student at the Expeditionary Warfare School in Quantico, Virginia. As I prepare to move, I have taken some time to reflect on my year in command and think about what will come next.

When I took command of my company last summer, I was still closeted at work. Because of some of the involvement I’d had with LGBT organizations, and having become known as a guy with pretty strong (and sometimes vocal) opinions about the issue of DADT repeal, I suspected a few people already knew about me. I know at least that there were rumors. I found out only much later that my perceived sexuality had come up in discussions about me as an officer, and was proud of the people I ended up working for that it never became an issue–at least not one significant enough to prevent me from being assigned as a company commander.

I spent a lot of time at work trying to figure out how to better do my job. Being my first command, every day was a learning experience. I learned about the technical aspects of processing and training recruits and general concepts relating to networking and leadership. As Marine officers, we are taught that “command” is being responsible for everything the unit does or fails to do, a pretty hefty responsibility. I tried my very best to make my intent clear to the Marines in the company, and then I worked very hard to enable them to carry out our mission. Much of my time was spent building relationships with outside agencies, agencies that my company relied upon to do their jobs. The rest of my time was focused on improving internal processes to ensure that the Marines were able to work with as little internal friction as possible. I tried very hard to streamline these processes and remove inefficiencies.

If I have any regrets, the biggest is that I wasn’t able to build as strong personal relationships as I might have liked with the Marines in the company. As I look back now, I believe much of that came from a lack of experience in building those relationships from the position of being a company commander–having to strike a balance between being a friend and being in charge–and a lack of confidence in relating to people who had vastly different interests, often ones I know nothing about (yes, I’m talking about sports). It didn’t help that I spent the first nearly nine years of my career specifically avoiding making personal connections with other Marines. It wasn’t safe for me to get close to people for fear of them finding out I was gay, and therefore it became preferable to just avoid people. I had developed a reputation for being all business, all the time. In some ways this was good–seniors knew I could be counted to take my work seriously and always follow through on commitments because I had nothing else going on in my life to distract me. In many ways, though, it came to mean that when people think of socializing or just hanging out, they never think of me.

My other regret is that after the repeal of DADT on 20 September and it became public knowledge that I was gay, I found myself occasionally reluctant to address the homophobia that still remained. I saw the Marines speaking in hushed tones and I told myself that they were merely adjusting to the new policy or the realization that their commanding officer was gay. At one point, about six weeks after repeal, one of the Marines came to me and told me there were comments and jokes being made about me. I addressed all the Marines and reiterated the Commandant of the Marine Corps’ guidance that all Marines would be treated with dignity and respect. As the Marine Corps learns to deal with life after DADT, it’s still very common to hear things derogatorily called “gay”, and “faggot” hasn’t exactly fallen out of favor in the vocabulary. Some days I just didn’t have the strength to correct it, and I admit that when I heard it resonate in the hallway I didn’t always step out to find where it came from and say something. On those days, I am thankful that my executive officer did often address it with the Marines. Either the jokes stopped or I just stopped hearing about them.

Although military equal opportunity policies don’t cover discrimination or harassment based on sexuality, perhaps if I had a more personal relationship with the Marines it would have happened less, or I would have been in a better position to casually correct it. From a leadership perspective that makes sense. From a human perspective, it’s difficult to force myself to get close to people who, although they may respect me as their commander or fellow officer, have made it clear they don’t respect me as a person, not because of something I did or didn’t do, but because I am openly gay. How does one combat feelings like that when they are still passively accepted as valid? We call people who don’t respect others because of race “racists” and because of gender “sexists”, and actively seek to discourage this form of disrespect, but if it’s because of sexuality, that’s their constitutionally-protected freedom of expression and the gays just need to get over it.

Some well-meaning senior officers and commanders have warned and reminded me that this same lack of personal respect for me may hinder my career, and that being publicly known as a gay Marine could cause problems for me. I am sure there are people who think that even though I’m allowed to be open that I shouldn’t be. I am equally sure that after desegregation of buses in 1956, black people in Montgomery, Alabama were still expected to sit in the back even though the law no longer required them to. I am supposed to be understanding of people’s discomfort with gays–especially those serving openly, even though DADT has been repealed and my service is to be valued equally among my straight peers. I am supposed accept that although the new standard is the same as the old standard–that everyone is to be treated with honor, dignity, and respect, some people might still treat me otherwise because my personal life is too much for them to handle professionally. I am supposed to tolerate people who would disrespect me or my service because my sexuality goes against their personal beliefs. I am supposed to concede that when these people are in a position of power or seniority over me that discrimination from them is my own fault because I knew they had a problem with gay people and was gay anyway.

Despite these warnings, I believe that living openly, with honesty and integrity, is the best thing I can do for myself and for the Marine Corps. I believe that those who continue to display their homophobia around the younger generation of Marines will find themselves estranged from the ones they claim to be protecting from “social engineering”. As more Marines find the strength to serve openly, and other Marines come to realize that one’s sexuality has nothing to do with his ability or desire to serve, intolerance will no longer be tolerated. Momentum towards equality in the military is growing, not because of legislative repeal of discriminatory laws and regulations, but because minds are changing to value the contributions and equality of all service members. As I relinquish command and move on from the Depot and in my career, I look forward to things continuing to improve for gay service members. I hope to have the same opportunities as any Marine officer with my qualifications. Maybe I won’t. I do know that I will not accept responsibility for limitations placed on my career because I refuse to continue to sit in the back of the bus.

I am proud of the fact that, despite my day-to-day struggles with being openly gay as a Marine, my overall experience has been positive. Over the course of the past year, I took a date to a Marine Corps Birthday Ball for the first time, was recognized by the Military Acceptance Project and the North County LGBTQ Resource Center, gave lectures and participated in panel discussions at San Diego State University and University of California San Diego, planned a Gay and Lesbian Straight Education Network (GLSEN) award night for Gay-Straight Alliances in San Diego schools, attended the first OutServe International Leadership Summit and the OutServe Capital Summit for military families, engaged congressional leadership in recognizing and supporting all military families, joined the Actively Serving Leadership Council for OutServe, participated in a meeting between LGBT military members and Joining Forces, and attended the LGBT Pride Month Reception at the White House. I also had countless conversations with Marines about being openly gay in the military, ranging from junior Marines looking for guidance in how to come out to their peers and commands, fellow officers trying to better understand the experience of gays in the military, and seniors figuring out how to deal with having openly gay Marines in their units.

After ten years as a Marine and a year in command, I feel finally able to serve as myself, proud of the fact that I have maintained my integrity while taking on challenges both personally and professionally in my effort to make myself, my company, and the Marine Corps better. Moving forward, I will continue to serve my country and do so without shame or apology for who I am. I hope to inspire and support others in their quest to do the same. I will continue to work to prove that our strength as a Marine Corps comes not from the idea that we are the same, but that from many we are one, always faithful.

U.S. Marine Corps officer living in North Carolina. The views expressed here are my own, and are in no way intended to represent the United States Marine Corps, Department of Defense or any of its components. View all posts by Matthew

16 thoughts on “A year in review and the road ahead”

This site uses Akismet to reduce spam. Learn how your comment data is processed.