It’s not that I dress up to go to the gym–I’m really only there to work out. But I’m also well aware of the fact that people who are just at the gym to work out also look around at their fellow gym-goers, even if it’s just to say hello or ask if someone is done with a certain piece of equipment. When you go to the same gym all the time, you inevitably run into people you know. You get workout ideas from people around you. (I’m convinced that the reason there are so many mirrors in the gym is so you can look at people with a smaller chance of them realizing they’re being looked at.) So, because I am conscious of the fact that people will see me, and because I am not a caveman, I put a little effort into my gym attire. Today’s internal wardrobe debate came about because I happened across this shirt, and I stopped to contemplate whether I should wear it to the gym on base.

So why talk about this now? It’s not pride season*, especially in Okinawa on a Marine base. I’m writing about this now, today, because I spent 20 minutes deciding what to wear to the gym today, and that seemed worthy of a little discussion. *(LGBT Pride Month is officially June, but it’s like the gay holidays, so there’s a whole season. Ever heard the term “circuit party”?)

The photo below was me at the San Diego Gay Pride Parade in June 2011 posing pre-parade among the San Diego Cruisers, one of the nicest group of guys I had the pleasure of knowing while I was living in San Diego. The law known as “Don’t Ask, Don’t Tell” had been repealed by Congress, but repeal had not yet been implemented by the military (that wouldn’t happen until September 20 of the same year). 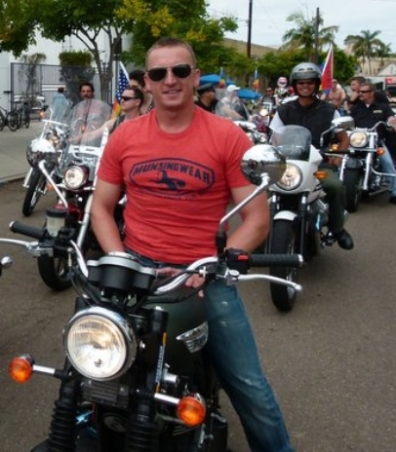 I was not always a supporter of celebrating Gay Pride, but as I grew older, I became one. I am one now, more than ever. It seems that every year around pride season, there’s a slew of commentaries from all sides of the Gay Pride debate: why gay people should or shouldn’t celebrate, whether straight people should celebrate with their gay friends, whether Pride festivals are just about kinky sex fetishes, whether Pride parades are political or whether they should be political, whether the parade floats themselves are too wild or they’ve become too tame, etc.

It turns out, the arguments about celebrating Gay Pride are as diverse as the gay community itself (if there even is such a thing anymore). It’s about all of the things I mentioned previously, with the common thread being that gay people are everywhere and do everything that everyone else does. If you watch the parades, you’ll see the entire alphabet soup of LGGBTQQIAAPPK represented.  You’ll see that there are gay men who are go-go dancers, strippers, baton twirlers, and drag queens, but you’ll also see that we’re fire fighters, teachers, politicians, accountants, and many other things as well. (But how many people could really be expected to turn out for a parade of accountants?) The message is, and has always been, the same: we’re here, we’re queer, get used to it. We just all express that idea in different ways.

Because I wear a uniform to work, I tend to look the same as everyone else. There is no personal statement to be made while wearing the Marine Pattern Utility uniform (aka “cammies”), and that’s kind of the point. So when I am not in a prescribed uniform, that’s when I get to make a statement. In civilian attire, I can choose if it’s going to be a shorts and flip-flops kind of day, a jeans and t-shirt kind of day, or a slacks and oxford kind of day. It’s a little dose of personal expression that Marines tend to value highly. Why else, when a Marine gets in trouble and is put on restriction, would the privilege to wear civilian attire be taken away?

When I go to the gym, I like to wear t-shirts from races I’ve run, events I’ve participated in, or units I’ve been assigned to. It’s my brief opportunity to make a statement, to show a little pride in myself and my accomplishments. I often wear my shirt from the Human Rights Campaign’s Athletes for Equality initiative. (I think, though, that many people outside the LGBT community are unaware of HRC. At the very least, I know many people don’t recognize the logo–I’ve had people see the sticker on my car in the past and ask if it was captains’ bars.) I’ve worn OutServe t-shirts before, but again, unless they read the fine print, most people don’t even know what that is. But when you wear a t-shirt like the one above with rainbow lettering that says “PRIDE”, there’s little question what it is all about.

So, as I was getting dressed for the gym this morning, I thought, “Should I”? Should I make such a bold statement with my t-shirt at a gym on a Marine base in Okinawa, Japan? Should I advertise to everyone there that I ran this particular event? Should I show deference to people who are undoubtedly still uncomfortable with gays serving openly in the military? Should I more or less declare my sexuality to the people just trying to get a workout in at lunch, forcing them to think about their attitude towards homosexuality? It was this last question that started me thinking about the same thing.

Why do I feel such a need for people to know I am gay? The answer dawned on me very simply: because they assume I’m not. For whatever reason, I don’t fit their stereotypes. When I was first coming out, I tried to assume some of the stereotypical traits, because that’s what I thought I was supposed to do and because I admired the strength of people who had them to live so freely and openly. I have plenty of rhythm, but my hips do not move in a way that would ever land me a job as a go-go boy in a nightclub. If I try to queen out, I just end up insulting people because I look like a homophobe making fun of gay people. Although I enjoy broadway musicals, I don’t know the lyrics to any of the songs. I have never once worn either glitter or a leather harness to a bar. I have danced shirtless and been insanely drunk, but I’ve never done party drugs. People I went to college with (I majored in music performance) and people I worked with for years (Walt Disney Entertainment) have told me they never had any idea I was gay. And I was completely out of the closet the whole time. I just don’t look or act in a way that many people associate with “gay”.

Part of the reason I was able to survive in the military under DADT for so many years was because most people don’t assume I’m gay. I was able to use this as an advantage–no one ever expected a gay guy to want to do the things Marines do. Shoot guns. Fight for fun. Get dirty. There was no room in the minds of people who considered being a Marine to be the ultimate expression of masculinity for gay men to exist (or women, but that’s a discussion for another time). So I capitalized on my natural ability to appear “straight” and got through it.

But I always felt guilty. I felt that I was pretending to be something I wasn’t. The reality is that I wasn’t pretending–I only had to watch what I said or did–I didn’t have to try to act a different way. I didn’t have to “butch up” to go undetected by people who would have otherwise made my life much worse. I didn’t have to learn a new way to talk, or walk, or make hand gestures. I once confided in someone who later told me the reason he was OK with me was because, “I know that you’re gay, but you’re not a fag.” I guess this was supposed to make me feel grateful for his friendship, but all it did was make me resent ever having told him I was gay in the first place. In his mind, I was better than other gay men because I wasn’t “obviously gay”. Similar to the guilt I feel sometimes about being born white in a world where white people enjoy privilege over blacks or other racial minorities, or being born a man in a world where women are still oppressed, I sometimes feel guilty that I can pass for “straight” without acting while many of my gay friends cannot. I know that my life has been in many ways easier because I am white, because I am male, and because people don’t know I’m gay unless I tell them.

But just because I can pass for straight doesn’t mean I want to, even if it would make things easier. I don’t want to live an easy life, I want to live a meaningful one. I want to honor heroes like Harvey Milk, Alan Turing, Sir Elton John, or Neil Patrick Harris. I want to march in parades that show people the diversity of the LGBT community, that make people uncomfortable, that make them face their own attitudes towards sexuality, that make them question their idea of what “being gay” is. I want kids to grow up and not be bullied for their actual or perceived gender or sexuality. I want everyone to have the right to marry whomever they choose. I want religions and their followers to love more and hate less. I want governments to stop arresting, torturing, and killing people based on their sexuality. I want LGBT athletes to not fear going into their own locker rooms, celebrities to be embraced by their fans for being honest, and politicians to be elected for being genuine. These are certainly lofty goals, and not necessarily ones that I can affect directly. But I can’t do anything by hiding in a closet, even if I didn’t build the one I often find myself in.

So that’s why I wore this shirt today, and why I’ll wear it again. Get used to it.

U.S. Marine Corps officer living in Albany, Georgia. The views expressed here are my own, and are in no way intended to represent the United States Marine Corps, Department of Defense or any of its components. View all posts by Matthew

7 thoughts on “Wearing my Pride”

This site uses Akismet to reduce spam. Learn how your comment data is processed.